As a seasonal challenge I thought I would try to make a light-up Christmas card. I have documented the entire process and challenges I faced along the way. Why don’t you have a go with some paper circuits? The advantage with using a paper based medium for this project is that it allows a high degree of creativity into the process – even traditional “crafting” practices can be incorporated into the mix to create a highly visual and hands-on activity. Why not let us know how your own paper circuits have turned out. Have you used them to teach electronics to children? Share with us how you got on.

Having never used the Bare Conductive paint before I was keen to see how it worked in practice. I was pleasantly surprised by how easy it was to test out the paint with some batteries and LEDS on basic laser printer paper. I wanted to implement something which worked functionally but also delivered a pleasing level of creativity. The rapid implementation and ease of prototyping means you quickly master the basics of laying out a working circuit and can move swiftly on to the next stages of the project. It’s a lot more accessible than getting to grips with the mastery of soldering.

I wanted to use the conductive ink and make the circuit interactive, incorporating the user’s hand into the design. Other design examples I have seen use a folded over corner to the structure to act as a switch and a point to close or complete the electrical circuit. I didn’t want to fold over one corner of my card design as it would have not created a desirable visual outcome. Instead I wanted to create a sense of magic when the user places their hand on the painted bauble and the LED lights up. 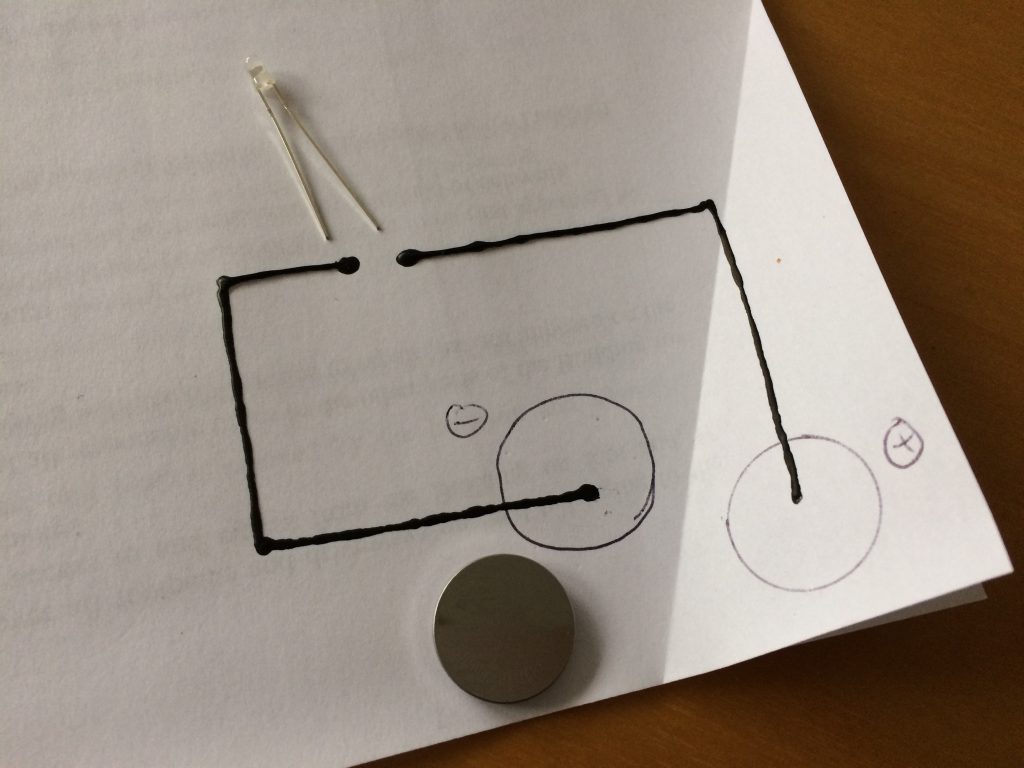 For the design of the bauble element I wanted to take the basic principles of a touchable switch which creates a closed circuit when the users hand is placed upon it. I studied examples online using basic straight designs and then tried to prototype some more creative layouts. At every stage though I had to keep in mind that the two sides of the switch could never touch or overlap and also needed to be close enough to each other so that even a simple finger press could bridge the loop. From a creative design perspective I wanted something lavish and decorative, it is a Christmas theme after all! My aim was a swirly, curving form reminiscent of an old fashioned Christmas bauble. I drew many pencil sketches working out as many possible areas on the circle where a single finger press could close the switch. After a number of sketches I settled on a general approach and drafted my final layout. The pencil part was easy! It wasn’t quite so straightforward using the conductive ink. The thicker lines were ok painting with a brush and the paint straight out of the tube or pot. But the thinner lines were another matter! The ink was not quite so workable whilst trying to paint the intricate swirls as the viscosity of the paint and the small brush size meant the paint dried quickly and didn’t run as smoothly over the watercolour paper. I researched online to see how or whether the paint could be diluted and still function electrically. Luckily Bare Conductive have some great articles demonstrating how to water the paint down, the effect it has a various dilutions and also how you can dilute it using other media. I only needed to thin the paint very slightly to achieve the desired fluidity needed to paint the swirls and was fully expecting to have to paint a number of layers to make the circuit conductive enough. This has not been necessary yet but I may look at adding some more layers of paint to see if that reduces the resistance of the circuit and allows the LED to light up more intensely. 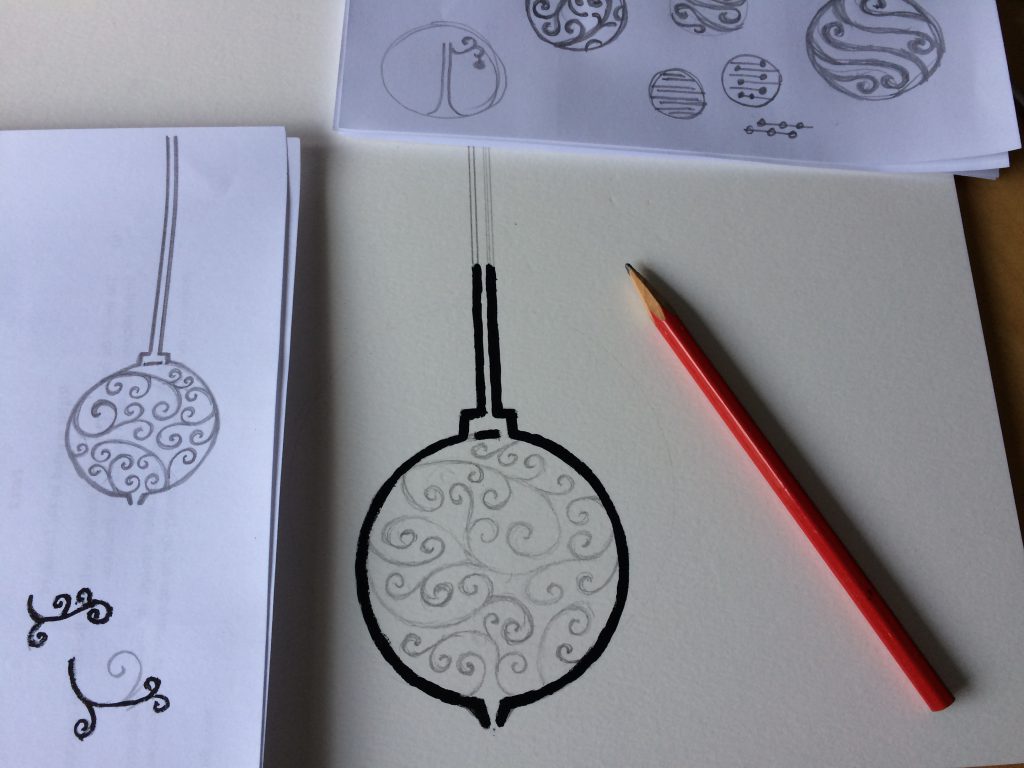 Sketching designs for a suitable circuit. 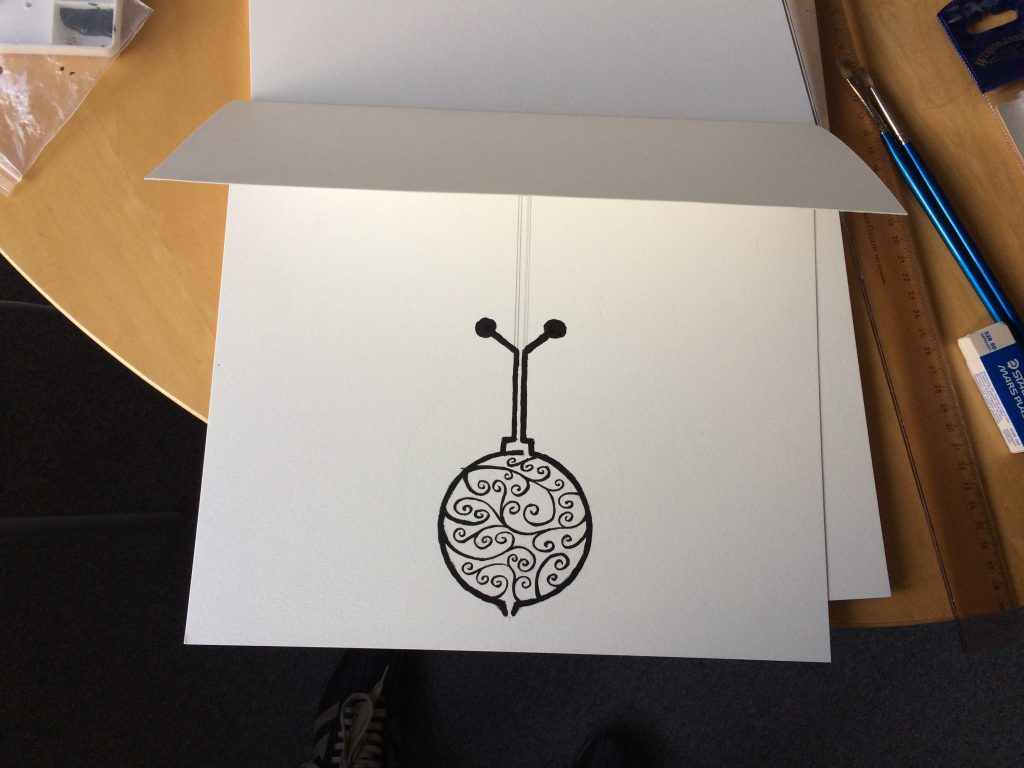 The finished bauble design painted with the conductive paint.

To compensate for the high resistance, created by both the slightly watered down conductive paint and also the very thin swirly lines I had drawn, I wired up two 3 volt coin cell batteries in series to start the circuit off with a max 6 volts, remember that in terms of electrical principles when you wire up batteries in series their voltages add together to make the total voltage potential for the circuit. Using a multimeter I tested the completed layout at various points to get an idea of the voltage drop and general resistance. The readings topped out at about 5.93 volts which was a good base level to work with and light up the LED. 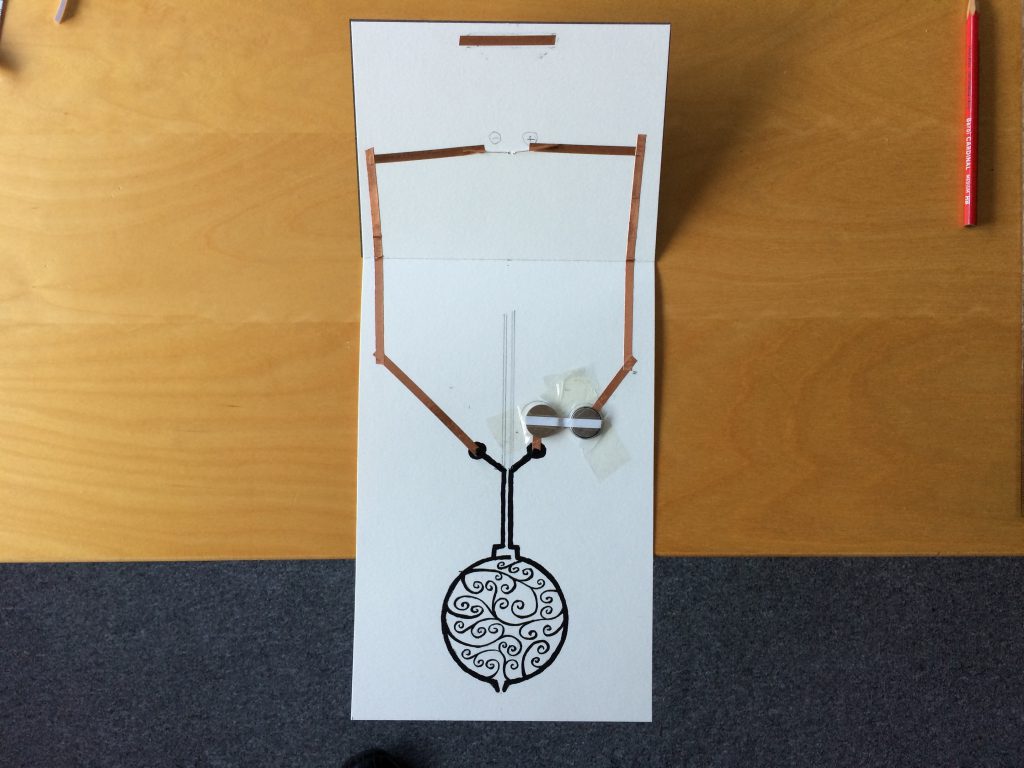 The circuit exposed under the card fold. 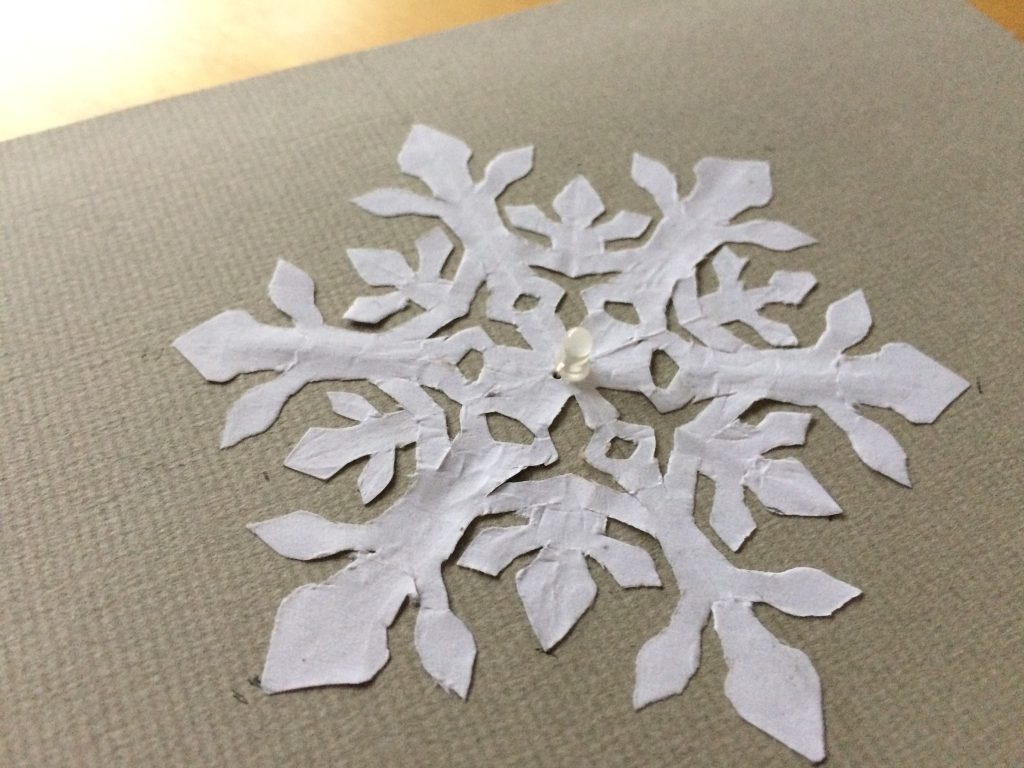 The paper snowflake with LED

As my skin was not conductive enough to make the LED light up when I placed my hand on the bauble I designed a back up switch into the top of the folded over card section. By using another strip of copper tape I created an area on the top card fold there you can press down to close the circuit and bypass the bauble part of the electrical loop. Because this shorter circuit has less resistance it makes the LED light up much more brightly, which is a nice touch as the “Plan B” switch can also serve as a demo mode to showcase the card lighting up to its maximum effect. 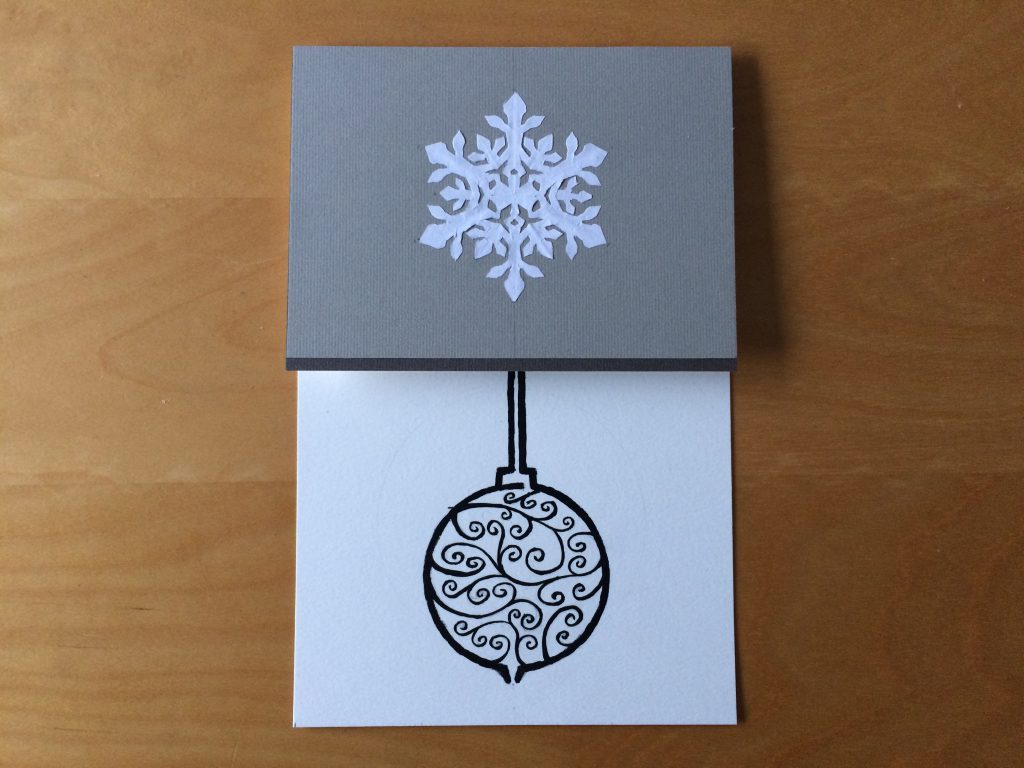 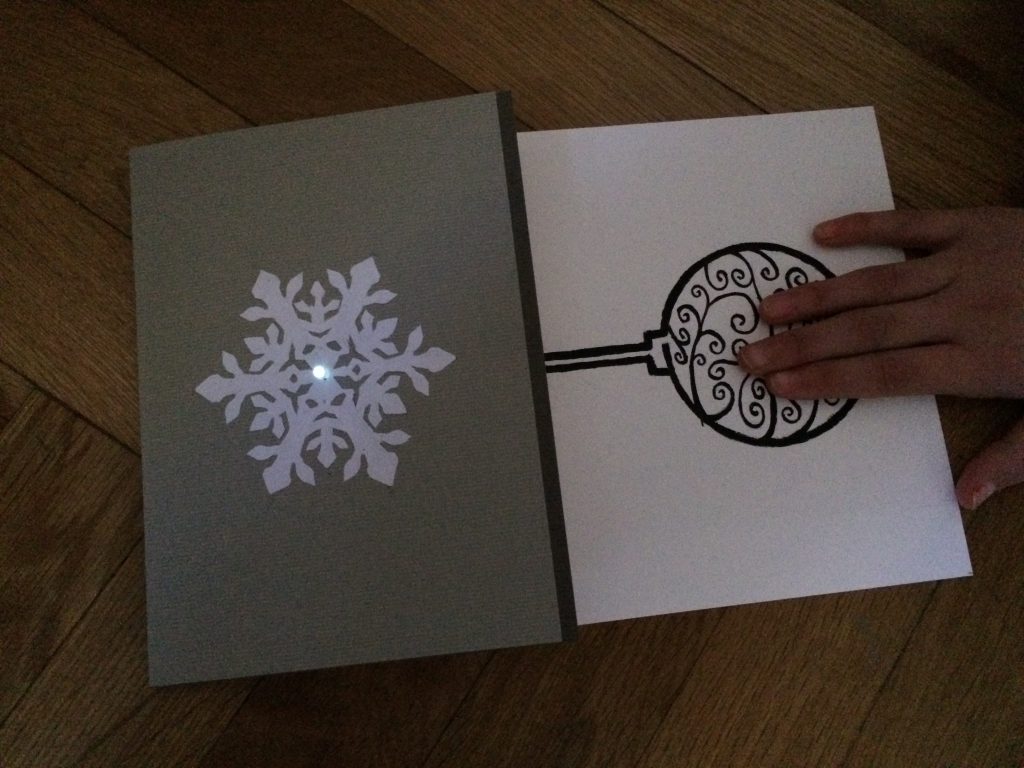 The touchable circuit in action!

Here is a quick summary of some failures and challenges along the way –
The copper tape kept cracking where it ran over the folded sections of card. I performed a quick fix at these failure points by painting over and into the splits with some of the conductive paint. This demonstrates another handy aspect to the paint’s feature set as a quick fix for broken circuits.
The conductive ink straight out of the pot or tube was a bit too thick for the intricate design I wanted to create on the bauble. I had to water it down a bit.
PVA glue made the coloured pastel paper “cockle” (ripples on the surface of the paper) when glued in layers so I used a Pritt Stick instead.
My skin is not very conductive so looked like the bauble did not work but worked fine using other people’s hands.
It was not really feasible to create a pleasing snowflake design using the copper tape, I could put together a basic snowflake shape but It wasn’t up to the standard of my design intentions.
Making a very intricate snowflake design using the folded paper technique was only possible at larger sizes. As soon as I tried to make a smaller sized snowflake it was very difficult to cut such intricate shapes using a scissors. When I moved over to using a scalpel it was easier to work at the smaller size but the way the paper folds meant that sometimes parts that I needed to keep were pushing out of the folds as I was trying to cut nearby areas meaning that mistakes were cropping up, bits that I needed to keep were getting cut off by mistake. I sure with lots of practice and a super sharp and fine scalpel blade I could have achieved a perfect snowflake but I had to make do with one of my tests in order to save my sanity and keep to my deadline 😉

Outcomes – Ways to improve upon the existing design –
Make it more conductive so even my skin works better.
Incorporate a means to secure the top, folded over section of card, so it remains closed
Make it stand up by itself, the design is top heavy due to the “Hardware” of the circuitry and the extra folds of card on the top half so I need to think about how to stop the weight of the card bending itself and also ways to allow the card to become self supporting.
I would have liked to add stylish lettering into the design and also experiment with how to incorporate this into the electrical circuitry.
On a practical level I need to improve my paper cutting skills to create much more precise and intricate snowflakes.

Outcomes – Ideas to try out for future designs which build upon what I’ve learned here –
More dynamic components and circuits – such as using 555 timers to make noise or animated LEDS.
Variable resistance designs to make LEDS switch on like a bar graph or graphic equaliser – an idea such as an “excited for Christmas level-o-meter” (obviously would need to go up to 11!)
I would like to use a small Arduino board such as an Adafruit Trinket and capacitive touch interactions to make a design which responds to your hands proximity rather than just a simple press on , lift off interaction.
Surface mount LEDS or even tiny Neopxels would allow more complex designs which would look better as you wouldn’t have to have bulky through hole LEDS pushing through the surface of the card. The downside to using such tiny surface mount or (SMT) components is they are fiddly to work with and your design from an electrical engineering perspective needs to be much more accurate and precisely aligned.
Colour changing LEDS would add to to creativity of the experience but require some form of input or control in order to change or at the very least cycle through colours.
Could I use electro-luminescent or el-wire and tape to make light up sections? Would need to investigate the voltage requirements of e.l materials.
Memory alloys could present some interesting effects when integrated into folding paper structures – moving, pop-up elements would create some great effects.

Areas for further investigation to help guide future designs –
Study the further possibilities of Bare Conductive paint and how other artists are using it.
Paper engineering – look at control structures inspired by pop up book mechanisms
Look at Electro luminescent materials.
Investigate other components and circuit designs to increase the interactivity, level of control and provide greater responses in terms of visual, auditory or kinetic effects.
Would it be possible to use principles or electromagnetism to effect physical motion in parts of the design? I Would only need small a current as any physical parts would be very small and light therefore very little force would be required.
Look at CNC paper cutting machines which allow very detailed designs to be cut from paper.

In summary, paper circuits and conductive ink are a great way to start your creative electronics journey. Rapid construction, prototyping and testing means results quickly inform the learning process. Improvements and next stage designs feed this learning back into the process to keep up the momentum and the creative possibilities make for some exciting topics to help theme the activities. In this instance we used Christmas as our subject matter but any topic could be woven into the mix.