The Steamship team were recently invited to take part in Combe Down Primary school’s Sciencefest week.

We were asked to deliver a workshop to a class of key stage 2 children on the subject of science and the outdoors! Thinking back through our previous tinkering sessions we remembered a great project on UV protection that fitted the bill perfectly, so set to work to adapt this to suit a larger group of children.

We were conscious to deliver a project that would be achievable for all abilities and for each of the children to be able to create their own project. Science was the main requirement but as STEAM experts we were obviously keen to throw some other subjects into the mix. We also wanted the project to be fairly cost effective, so that the school could replicate the workshop with other classes should they wish too without having to incur the expense of lots of costly materials.

Our plan was to give a brief introductory talk to the children about sunlight and UV rays. We asked a few questions, such as why do we need sunlight and how can we protect ourselves from too much sunlight. And we threw in a few fascinating facts about how other animals in the wild deal with sunlight – did you know hippos secrete a red oil to protect their skin, and people used to think they were sweating blood!

Then on to the challenge – we showed the children our little UV sensitive creature, made out of pipe cleaners and UV beads, and tasked the children to invent a special shelter to protect their creature from the sunlight. 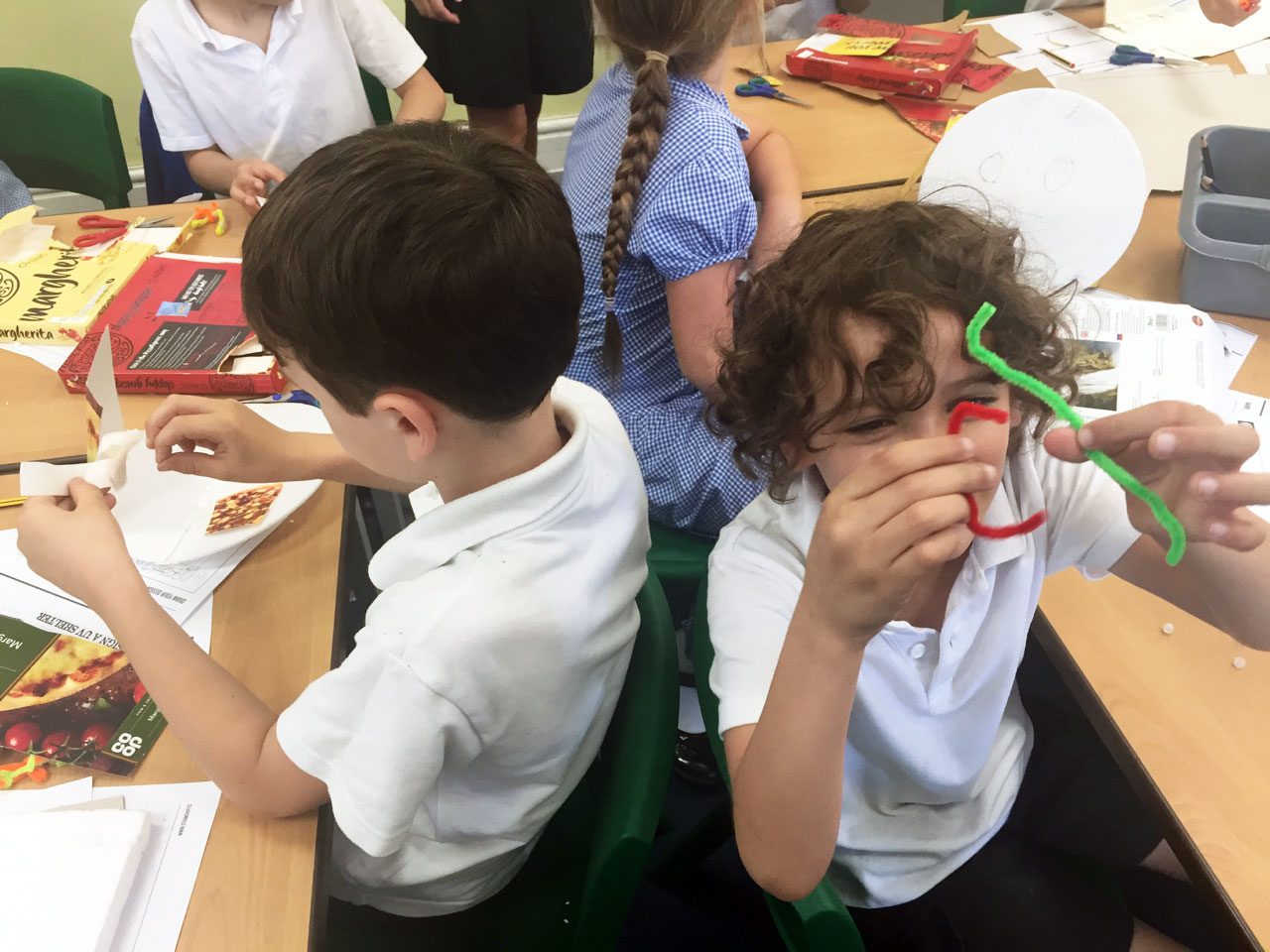 The children each had their own worksheet to plan their design on first, so they could fully consider how their shelter would look and how it should be constructed. Their designed were fascinating and so varied, some were very aware on the problem they had to solve and designed a very simple structure while others designed elaborate palaces. Most children drew their plans as 2D sketches while others drew 3D diagrams complete with annotations. One child designed their shelter with solar panels on the roof. There was also a lot of consideration put into designing the UV creature which we hadn’t anticipated. 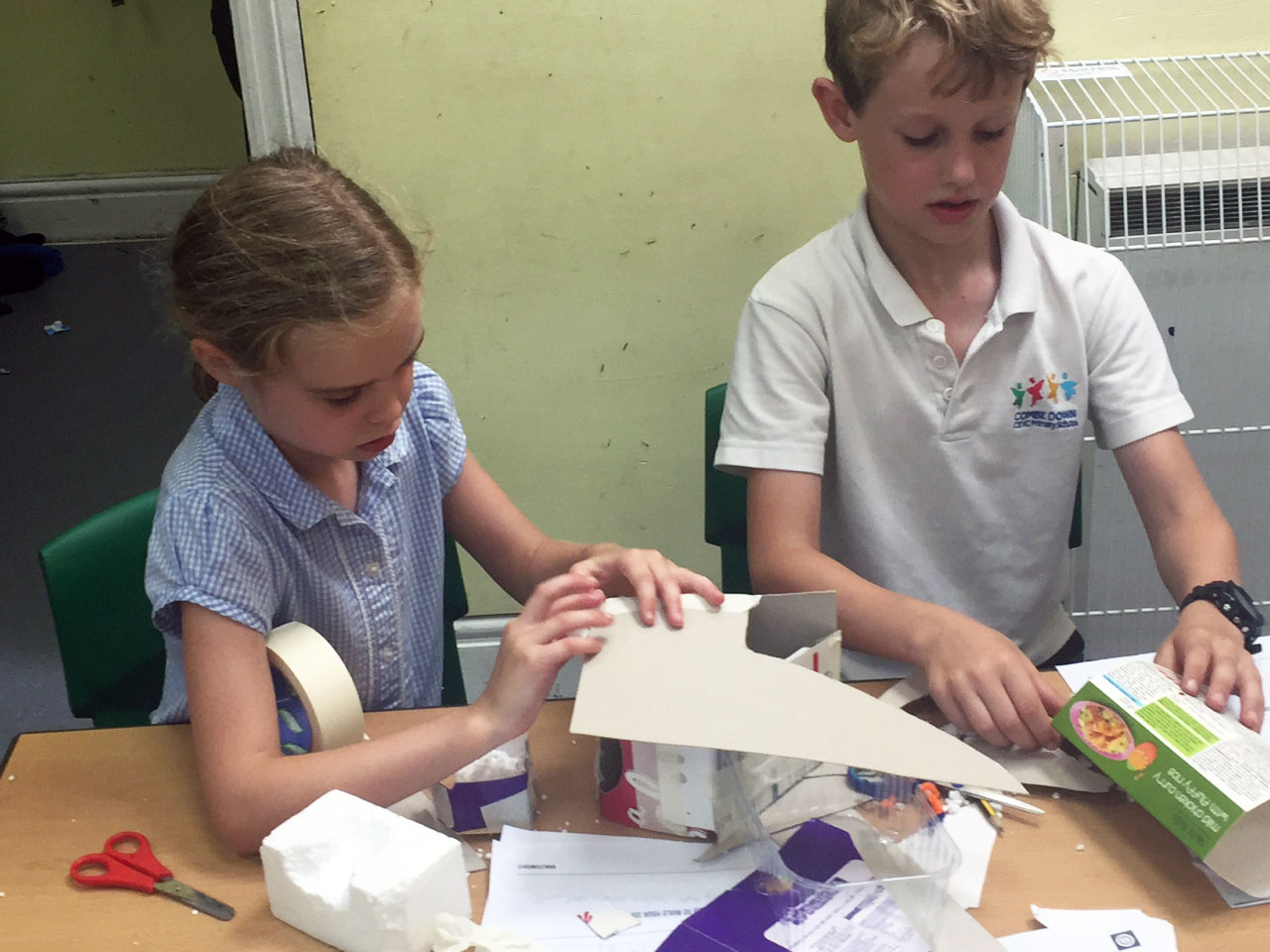 Then we let them loose on the cardboard and craft supplies to build their own model. This was the area where we thought the children might require more help, but actually with a pair of scissors and some masking tape, they were happy to tackle most of it themselves. Many strayed from their original design and others took it even further but creating elements to go inside there shelter as well, one even attempting to make a carpet out of polystyrene shavings – apologies to whoever had to clean that up afterwards!

Once completed we were able to take all the models out in the the playground to test them in the sunlight. Would their creatures be safe from the UV rays? Most shelters protected their creatures as anticipated, there were a couple who despite out hints hadn’t put a roof on their shelter and quickly discovered why that was an important element. One managed to do a quick rebuild while we were outside to fix the problem. It was fascinating watching this stage of the workshop, because the children quickly extended the testing to work out other ways to protect their creature, we noticed some of them moving their shelters to the shade under the trees so see if that would offer more protection, thus promoting discussions about light and shade and shadows.

Back in the class the children could record their results on their worksheets and make suggestions for any improvements they could have made.

Throughout the morning we also took small groups of children to help us with an additional extension project that we had prepared. With the aid of one of our technical experts, we helped the children create a special little robot friend called uuVee who could measure the UV rays. uuVee is constructed out of cardboard boxes with some simple electronics and a BBC microbit to control him. 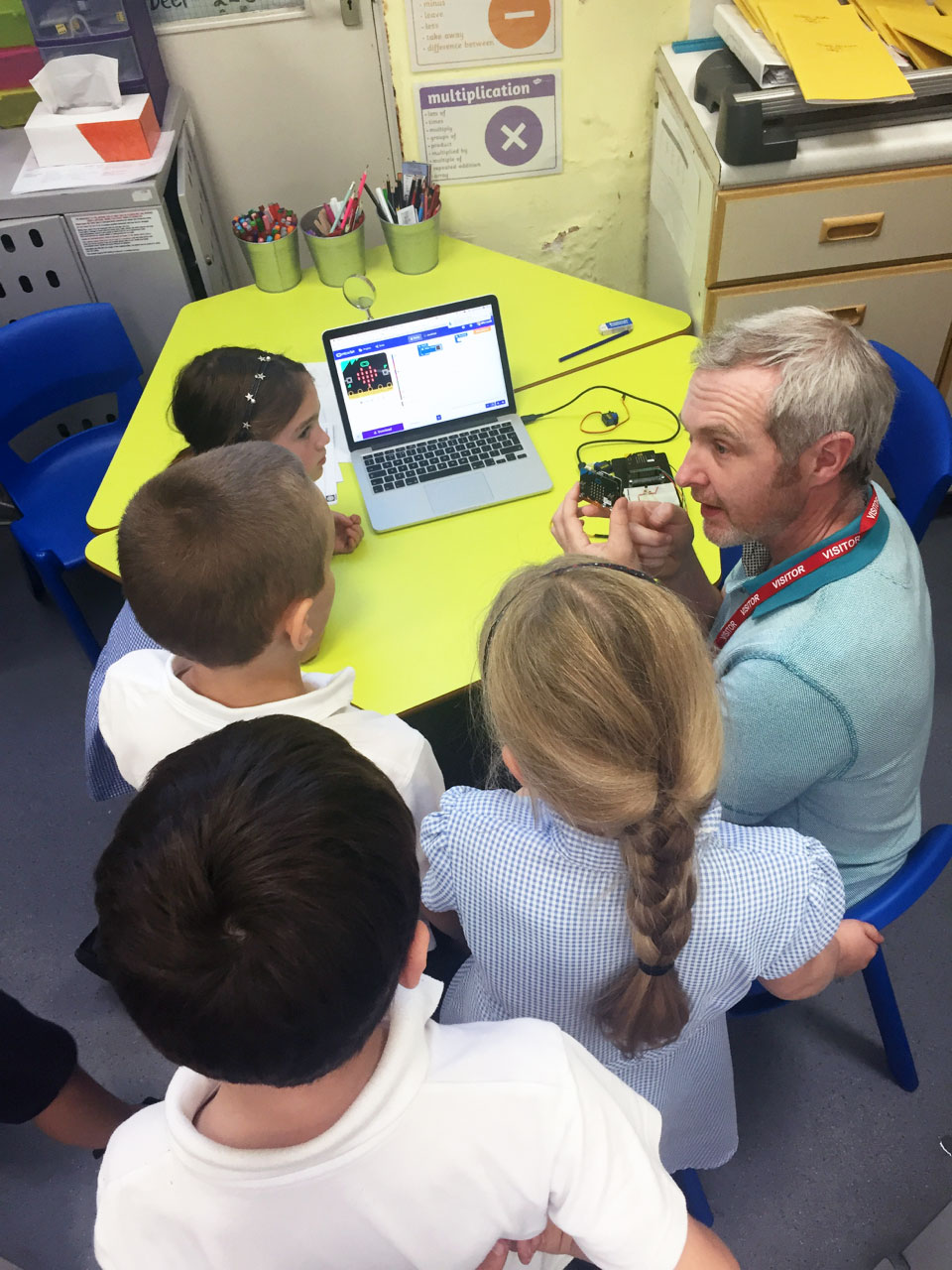 Most of the children had a little knowledge of coding in scratch from school and they had studied electronics earlier in the term, so it was great to be able to show them how they could use this skills to create a real working invention. Once the children had grasped how he could work and be controlled, they were very quick to offer suggestions for other things he could do, such as moving eyes or a voice. 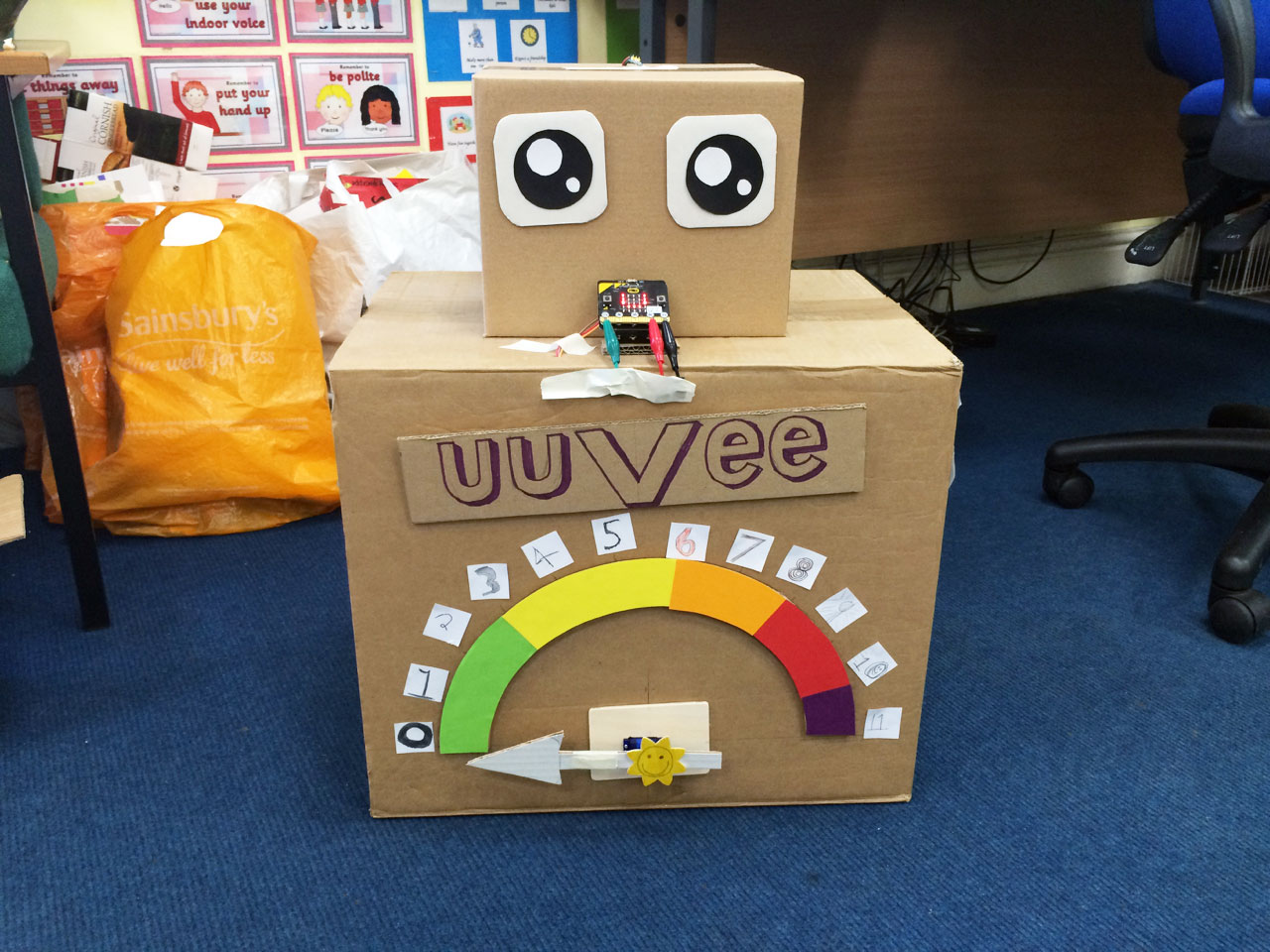 The workshop was a resounding success, the children and teachers both responded very enthusiastically to the projects we had prepared.

All the children throughout were very engrossed and there was a really sense of achievement that they were all able to produce their own model to show their parents.

Many of the girls in particular responded really well to the project and commented that they enjoyed it because they like art.

The teacher told us that the combination of subjects worked really well and touched on many curriculum topics they have worked on and will be studying in year 4.

Following the workshop, we received this message from the class teacher “Another very BIG THANK YOU for your amazing project. We loved every aspect of it, and have had our Science/Outdoor Week started in the most dynamic and fun of ways! I’m not quite sure how we will match this for the rest of the week!” 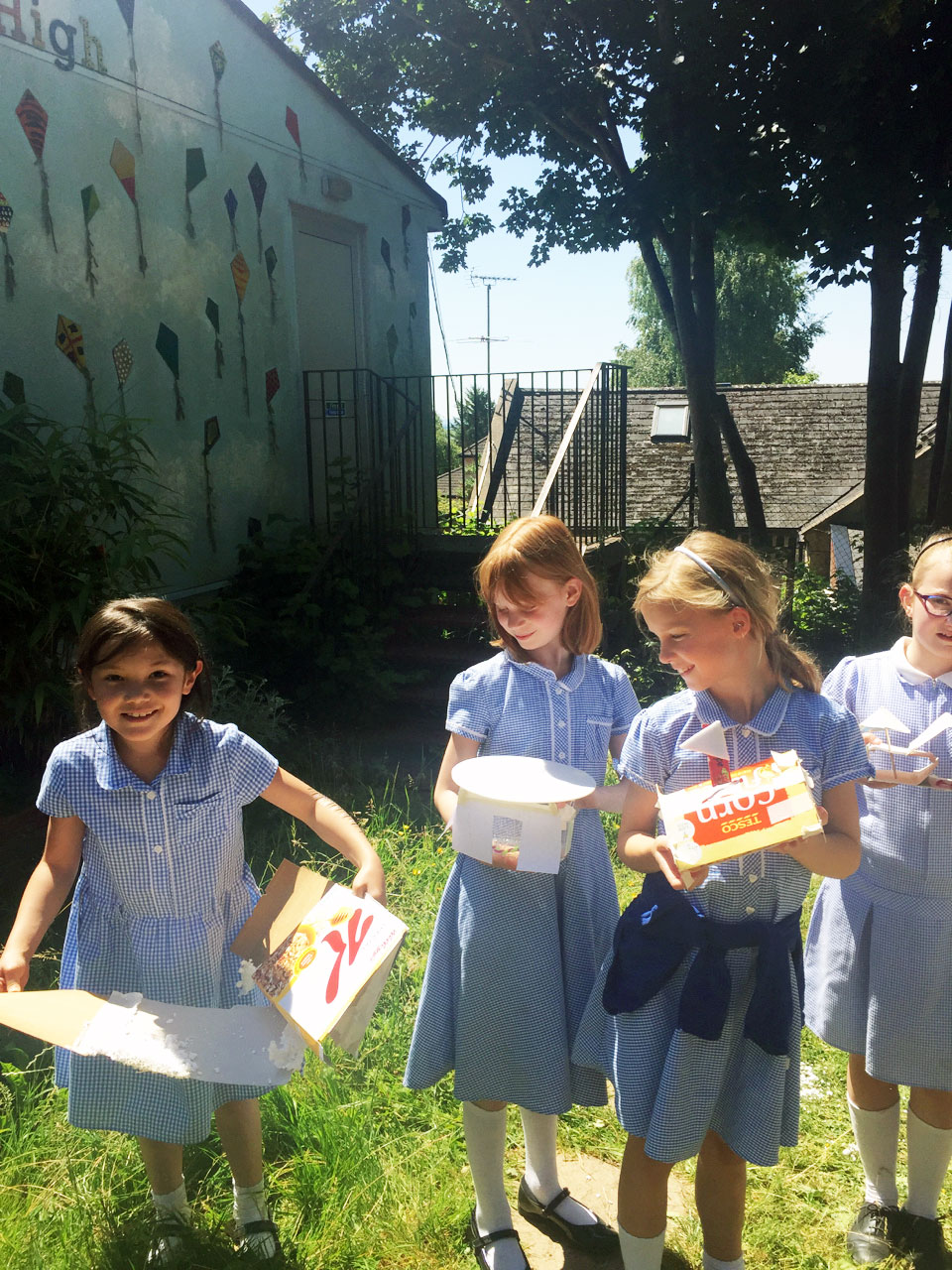